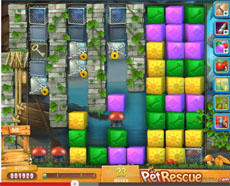 You have to follow specific strategy in order to complete pet rescue level 362. You have to “drive” at least two half column blasters in first column, clearing all the blocks left of them. Use the first to release the key, smash the wires of the pet box and destroy the metal boxes and the 2nd one to rescue the first pet. After that, you have to clear all the blocks between the two same colored pet boxes, after having cleared the wires around them, and bring them side by side. Then it’s easy to rescue the other two pets. Gathering the demanded points is another little problem of the level, so you have to clear as larger clusters of blocks as you can in order to reach at least the 7.000 points.

Probably you’ll not stuck on pet rescue level 362. But if you do so, the following video will help you to beat it.