Pet Rescue Saga, the freshest launch from King.com, has come to push the gigantic success of Candy Crush Saga a huge step forward. Bearing strong resemblance to the latter in terms of the matching-similar-blocks mechanics, it has already rendered tons of fan to avid gamers that are in the hunt for something new!

Your mission in the game is to save Pets of every kind (adorable puppies, cats, pigs, pigeons, bunnies etc.), which have been caught up on piles of blocks or jammed between columns, threatened by the Evil Pet Snatchers. To do so, simply click on the proper gems and piles in order to free your Pets’ path to the base of the level! At first, the game may seem pretty uncomplicated – and the early levels definitely fortify this perception –, but as it progresses, even talented and devoted players will be given a surprisingly hard time in moving on.

Pet Rescue Saga features a wide variety of constantly-expanding levels (King.com adds new levels almost twice a month!) in a colourful, puzzle-like appearance and in both urban and picturesque surroundings; like Candy Crush Saga, it requires the player to match similarly coloured blocks and items while the levels call not only for quick moves and skill but also for a fair amount of luck in order to be completed. Sounds already too familiar, doesn’t it? Well, the main principle is borrowed by Candy Crush Saga, no doubt about it, but some notable differences with the popular jelly-game are there, to add a couple of so needed new elements for the game to stir gamers who have had enough fun with the famous candy game.

A main variation in Pet Rescue Saga is that here, in order to help your Pets slip through to their salvation, you do not swap items but you rather stream down blocks to clear the path for your furry friends via clicking on groups of two or more similarly coloured stones that are in touch with each other. Another interesting add-on is that, by fitting bigger groups of items, a charge on a rocket-like bar at the bottom of the screen is being charged, and when it is fully energised, the player can make use of its power to clear a column at once!

Variations do not end here! One serious deviation that many Candy Crush Saga fervent gamers will definitely find difficult to adapt to in the new game is that, in case of columns taken out in full, a mystical magnetic force drags the Pets to the left of the screen! As you realize, this befuddles things significantly, and you must curb your urge to hoydenishly pop out surrounding coloured blocks so as to make actual progress.

Of course, the similarities to Candy Crush Saga still exist, helping the player to feel like being in an acquainted and cozy environment; for example, a series of power-ups and additional moves are available through in-app purchases, while the audio-visual effects bare a vague but substantial resemblance to the popular game.

Moving on to a more detailed look to the new game, here are some extra useful facts: 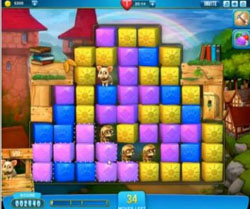 In summary, Pet Rescue Saga perfectly suits those gamers who are fond of Candy Crush Saga but have started to become slightly bored of that game’s experience. The new game is more pleasant and gratifying to play, with dozens of special challenges, levels of progressively escalating difficultly, brand new adventures, mind-sharpening conditions, solid gameplay, delightful environments, relaxing audio effects, cross-play compatibility between facebook and mobile versions and, of course, a respectful and courteous target: to save those lovable creatures from the danger. Obviously, the game mechanics cannot be considered so authentic, but King.com has its own way of merging several intriguing characteristics into a highly enjoyable and player-friendly game which also integrates social features as leaderboards for sharing fun with friends or competitors, keeping you constantly ignited! Just beware of one thing: the game’s addictive nature, which is likely to keep you engaged in it for many hours daily!

So, get yourself ready to save those Pets and stay tuned for the upcoming updates and game tips!