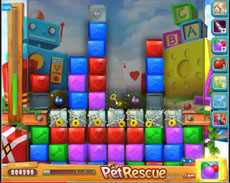 Start clearing the blocks in the left part of the screen till you activate the first bomb. Then try to activate one of the bombs in the middle, in order to release and use the key. After having used the key, then use the first bomb in order to destroy the metal box and some blocks in the first column of the screen. After that you have to clear all the blocks of the screen using maybe one more bomb. But you have to keep at least one bomb and make the two metal boxes there are in the lower corners of the screen to come side by side with the bomb and then to be destroyed. It’s a really hard level to be completed without extra hammers or boosters, buy we finally made it.

If stuck on pet rescue level 543 the following walkthrough video will help you to pass it.