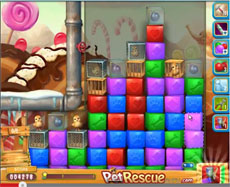 Pet rescue 576 is a tricky level. Don’t clear any blocks beside the pet in the middle. Let it be surrounded by wires till the end of the level. Use the first paint brush booster you’ll activate in the right part of the screen to drive the captured pet hit in the ledge and release it. Use the bomb there to release and the other pet in the right part of the screen there. After that to rescue these pets is easy. The difficult part is to rescue the pets two pets in the left part of the screen, because they are captured. To do it you have to drive the bomb between them to the bottom, but the captured pet to be in the penultimate line (use the 2nd paint brush booster you’ll activate to make it). Once you’ve done this, you’ll pass the level.