Do you have any idea how rapidly the Pet Rescue Saga Project expands? Probably it’s much more than you would ever imagine! The tool we used to calculate the progress in the game’s popularity was the simple, yet pretty useful Google Trends Tool, a tool that counts the popularity of several keywords according to the Google Search Engine’s searches for each keyword. In only 7 months the popularity of Pet Rescue Saga is increased 110% .. during the last month we had a 20% boost in the game’s popularity.. at the same moment (always according to the Google Trends) Candy Crush is only 10% below its historical peak showing that King has found the key of success! All those that were speculating  Candy Crush will soon fade away now understand how wrong they were.. and all these stats show that Pet Rescue Saga triumphant march is going to be lengthy and glorious! The image below shows the trends we described above: 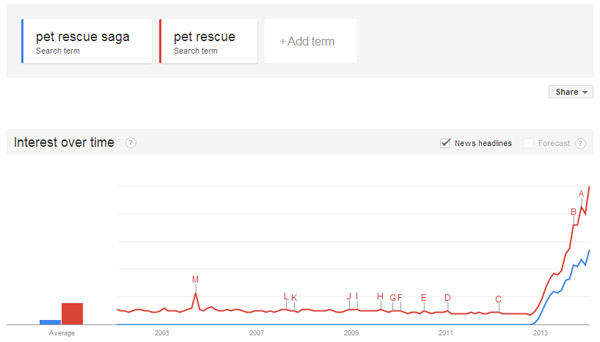 We will soon come back with more interesting stats regarding our favorite game!